I worked at Mod7 as the Creative Conceptualist/Writer for a Role Playing Game for BC Dairy. The premise of the game was to teach/educate children in elementary schools to eat food according to the Canadian Nutrition Guide.
I wrote story and dialogue; imagined, created and illustrated concept artwork and managed an artist overseas. I also designed game levels and participated in user tested the products with the children in the schools.
I was officially credited as Writer.
The game was a recipient of a Webby award in 2009-2010 and was popular with the children specified in the target market.
You may play Titanium Chef at: www.titaniumchef.com

These are ideas from the main navigation interface and the parallax scroll through images.

This is one of the concepts for a holographic competition game structure.

This is the narration design tree for the different characters that the gamer meets along the way. The gamer encounters new characters as s/he discovers the 6 worlds I designed.

These are some of the characters I created in 2d cartoon and 2d painted style. These avatars consisted of changeable heads, bodies, arms and legs. The user was able to switch out the pieces to create their own unique avatars.

These are the game levels that I helped to create. I designed the 'world map' first in photoshop and then over-layed the guided map on which gamers were able to explore and encounter other characters. Little puzzles and prizes were scattered throughout the worlds. Each time you found a prize, you were able to power up and discover new bits of nutrition trivia.
This is Planet Vestallia. Each world looked vastly different from each other requiring visitors to be both curious and resourceful. 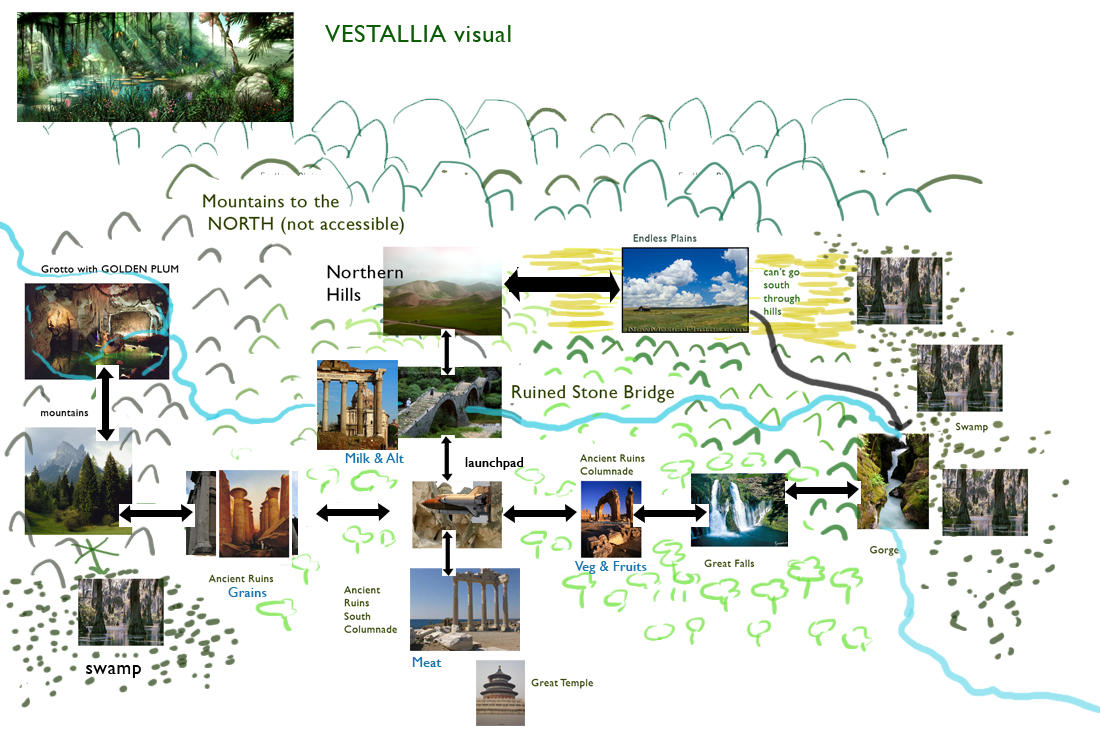 Homolco Outpost was home to giant marauding chickens. As an artist, this was the most fun I've had in years.

Preparing for The Gathering | Father and Child

Love Letters Lost
↑Back to Top